Morgan Godfery wrote an amazing obituary to Shane Jones’s retirement from politics. I was going to write something on Jones specifically, but Godfery’s piece summed up most the things I would have tried to express (although I would have done a poor job in comparison). However, one particular statement stood out as more of a general observation Godfery makes about Māori politics:

… I’ve said it before: Māori politics doesn’t sit apart from the political spectrum, but below it. At least the political right doesn’t pretend to be a false friend

While my personal preference would be to use ‘outside’ rather than ‘below’, I think Godfery makes the salient point about the subjugation of the Māori struggle to eurocentric conceptions of the political economy, namely, the socialist/left vs capitalist/right dichotomy.

It is becoming increasingly irritating (for me anyhow) when people claim that only the political left in NZ are capable of representing Māori in politics. I think this is an indefensible claim because it assumes Māori lead a homogeneous existence and that Tikanga  is a left ideal.  It reminds me of a quote shared by Bentham Ohia when speaking with Bolivian President Evo Morales which I’ve expressed before here and replicated in the picture below: 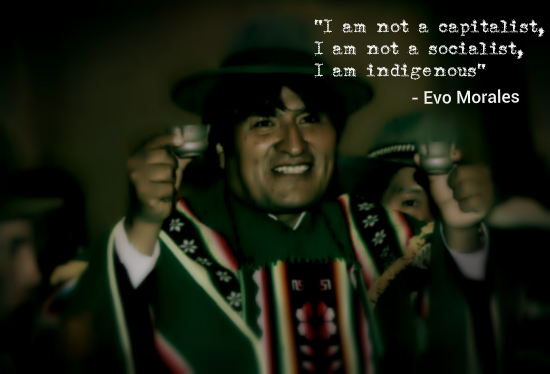 There is no shortage of non-Māori ‘advocates for Māori’ who consider they are in a position to advance arguments against Māori who step outside the lefts confines as traitors to Māori. As sell outs. As blights on the Maori struggle.

I’m embarrassed that I allowed myself to breathe this myth for so long coming to the realisation only recently about how wrong I was to propagate that view, and how offensive such claims are to Māori. It is wrong to expressly or implicitly clam that someone lacks tikanga values simply because they choose to cooperate with those of the capitalist class. Tikanga does not fit neatly into eurocentric political conceptions – it sits outside them but in being so, as Godfery points out, it is treated as inferior to the ideologies that occupy NZ’s political spectrum.

Embedded in these ‘left is best for Māori’ claims is the idea that Maori representation requires actions like picketing at state housing evictions in Glenn Innes, or protesting on Queen Street or outside the beehive. These are certainly admirable actions, they are grassroots actions, but they are not specific Māori focused grassroots actions. This is not an attack on Hone Harawira (or the Mana Party) who is highly respected for his Māori specific focus in his electorate – its a pointed criticism at the many on the left who craft a conception of Māori representation in terms of the class struggle.

I recall when Native Affairs interviewed David Cunliffe following his successful bid for Labour leadership. Mihi Forbes asked if there were any Māori policies that Cunliffe thought the audience might be interested in, to which he ignorantly replied:

Firstly let me state the obvious that Māori disproportionately benefit from Labours core policies around jobs, around warm dry homes, around education, around healthcare of course they do

He was promptly called out on twitter by Māori Law Professor Khylee Quince:

This is a prevailing stereotype in NZ. Yes, many Māori are unemployed and/or less educated and so on but being Māori is not synonymous with being poor as Cunliffe implies. Its no wonder the Māori struggle is subordinated when even those claiming to advocate for Maori, are advocating for the lower class to which they presumptively see Māori as belonging. We are poor first, then we are Māori. Apparently.

A radical departure from the status quo is needed if the Māori struggle is to regain its momentum.

I accept this claim is likely to irk many as a ‘separatist’ ideal. But it must be noted as I’ve expressed before, that tino rangitiratanga is not about taking power for Māori to dictatorially wield over non-Māori. Its about regaining lost power so that Māori can engage in a cooperative society on equal footing.  I’m also aware that many very hardy socialists will despise the claim that the Maori struggle is not a class struggle. But I’m not saying Maori can’t participate in both struggles, in fact I wholeheartedly support Maori participating in both struggles – I’m merely pointing out that there is a distinction that is too often ignored.

While it’s justifiable to claim those initially of the left who stepped to the right abandoned the class struggle, it is wrong to malignantly accuse those people of abandoning the Māori struggle as if the struggles were synonymous.

View all posts by Ellipsister

6 thoughts on “The Māori struggle is not a ‘left’ thing”

The Co-Op: An NZ Commentary Collective

He Don’t Even Speak Good English